President Obama, you must vote for Palestine now

Since President Truman, none of the American presidents have had the balls to take a stand and do the right thing; facilitate a lasting solution for the conflict between Israel and Palestine. The talk of two states remains a hoax without recognition of Palestine as a nation. It is a necessity for the security of Israel to recognize Palestine; it will tie the loose ends. 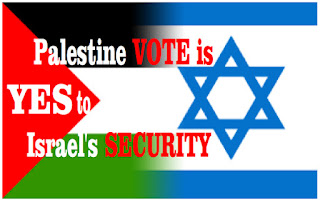 Sixty three years have been squandered with no signs of genuine security for the Jews; they have been living with an unsettling fear and have been on-the-run for their whole history. Not a week goes by where Anti-Semitism is not countered in Europe, it is there in Latin America and it is there in Asia.
The Jews have not been able to breathe freely. There is a genuine phobia that someday a segment of radical Christians will uproot them as Germany did in the recent past and Spain some five hundred years ago, those were the only nations where the Jews felt home twice in their history but were betrayed both the times.

Shamelessly, anti-Semitism continues to operate under the radar in the United States. Not a month passes here in the United States without the markings of Anti-Semitism. Some one’s house is painted with Swastika, someone yells at them “you people” or opens the fire in the Holocaust Museum or demonstrates hateful placards like “Christ Killers”, there are still a few Christians out there who cannot shake this off from their chests.

Shame on our civilization that one group of people has to live in apprehensions of the other. It is just not the Jews but many a minorities in the world live in fears of the other. Shouldn’t we feel bad about it? Are we evil that someone has to be afraid of us? It has got to change.

Recognition of Palestine will put an end to the phobias and fears. The Jewish anxieties will subside when they realize for the second time in their history (first one was creation of Israel) that they are able to live a life of justice, which is a central tenet of Judaism that they had abandoned for security. It will free their psyche. It will have a domino effect, one by one, the Arab nations will recognize Israel’s right to exist over a few years. It simply means acceptance of Israel and a welcome call to the neighborhood.
The real enemies of Israel are those who are milking monies in the name of Israel. It is business to them, they are the Madoffs whose sincerity to Israel is doubtful but loyalty to cashing in the name of Israel is certain. They are manipulators and constantly coerce our congress and senate and get their way. Heck, they have made it worse for Israel by aggravating the conflicts.
The Judeo-Christian phrase was thrown around 40's to make up for the guilt. A whole industry of opportunists was born from that. The two faced support for Jews by Billy Graham, Richard Nixon, Pat Robertson, John Hagee, Glenn Beck and other chest thumpers had ulterior motives. They wanted to cash in on the name of Israel and perhaps convert them or pre-empt God for the Armageddon.
Jews need sincerity and not duplicity to feel secure. A genuine security is like a child in mother’s lap; safe and free from fears. Jews need to feel there is a home for them, where they can chat with friends in a café and carry on conversations without any fear, have zero fears for their school going children or ride the bus without fear. More than that, Jews can live their life again as they wanted to; to be a just people.

All of that is possible once the Palestinians feel justice is finally served to them. Shame on our cvilization, we have not cared for the lives of Palestinians, they are deprived of the very basics of life; a home and a nationality. We have stripped them from their hopes, it will change with this recognition.
President Obama has an opportunity to finalizing the transaction for Israel which was opened by President Truman. Prior to President Truman’s decision to recognize Israel, he was vehemently opposed by many in his administration including the Secretary of State George Marshall, Truman was threatened that his administration will be wrecked, indeed “the wise men” firmly opposed recognition of Israel. Did Truman budge?
President Obama will be equally hounded by Fox News and the right wingers. He has a choice to stand up and act with courage and become a one term president with balls and leave a lasting legacy of bringing genuine security to Israel and hope for the Palestinians.

If President Obama vetoes for Palestinian Statehood, he will do more damage to America’s stature in the community of nations besides keeping Israel in the state of anxiety until another Truman is born.

Let’s recognize Palestine and continue the peace process. It will abate the strife between Jews and Muslims and restore the cordiality that existed prior to the World War I. It is good for Israel, good for Palestine, good for America and good for the Middle East and the World.
Mike Ghouse is committed to building cohesive Societies and offers pluralistic solutions on issues of the day to the media and the public. He is a speaker thinker and a writer on the topics of pluralism, cohesive societies, Politics, Islam, interfaith, India and Peace. Over a thousand articles have been published on the topics and two of his books are poised to be released on Pluralism and Islam. Mike's work is reflected in 4 website's and 27 Blogs indexed at http://www.mikeghouse.net/ and you can find all of his current articles at www.TheGhousediary.com
Posted by Mike Ghouse at 5:34 AM

Our problem is nobody bus us and our political and religious unqualified leadership.


On Friday sep, 22 after esha prayer I walked out of the masjid to ward my car by the fence close to mansfield rd joined me Br Shah Khan
when we approached the cars we found Brs Maqsude Khan, Mushtaq, Salahuldin Hakim standing their, we gave Salam and join the conversation about a meating they have the night before about a dispute they have
with the masjid comity and EmamSaid Atif ,
sudden we saw Said running screaming to ward us followed by some brothers and start attacking me verbally with all kind of curse you name it..the brothers manage to bull him away because he was so fired up and took him back to the masjid I will say about 300 ft back from where
we ware
When they asked him about the reason, he said that he saw me pointing finger at him meaning talking about him and that by it self got him to loose his mind.
I left home and took 2 day time to think about my respond to this historical attack, to fight or accept defeat I chose the second one because I realize that the problem is not Said ATIF only it is all of you and as the saying "as of the state you are on you would be lead"
كما تكونو يولا عليكم
Note, aim not denying that I was working on bringing change to the masjid status and have major issues with his fit to the position he is in with all the sins that he has done latly
before the incident,
May Allah guide all of you to be among those who
ممن يامر بالمعروف وينها عن المنكر
Best regards,

Remeber that past, present and future members of the board of directors, especially president / secretary / treasurer, who have shown their incompetence, will have to personally answer to charges levied against them due the way they operated DFWIEC for years and years in blatant violations of the applicable corporate laws and complete disregard to corporate bylaws.

That means you. The so called imam and self-imposed shure with vested interest. In the name of money we will sell our .....