Would Mahatma Gandhi go to heaven? Even though each member of the faith will thoughtfully acknowledge that he would, but the ones who live in cocoons, would say, not until he calls on Jesus as his savior, or recites the Shahadah (Muslim pledge). A Muslim took an incredible leap of faith on the national TV on the eve of interfaith prayers in Newton Connecticut, in presence of the president, watch the video. 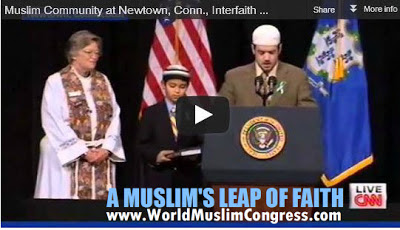 Mike Ghouse is a speaker, thinker and a writer on pluralism, politics, peace, Islam, Israel, India, interfaith, and cohesion at work place and standing up for others as an activist. He is committed to building a Cohesive America and offers pluralistic solutions on issues of the day at www.TheGhousediary.com. Mike has a presence on national and local TV, Radio and Print Media. He is a frequent guest on Sean Hannity show on Fox TV, and a commentator on national radio networks, he contributes weekly to the Texas Faith Column at Dallas Morning News, fortnightly at Huffington post, and several other periodicals across the world. His personal site www.MikeGhouse.net indexes everything you want to know about him.
Posted by Mike Ghouse at 7:37 PM