Ramadan’s Pluralism Message | Intrafaith and Interfaith goalBy the end of 2020, there will not be a major city in America, and perhaps in the world, where you will not find people of different faiths, cultures, ethnicities, races, nationalities and social backgrounds working, eating, praying, playing, marrying, and doing things together.  This is bound to create conflicts, and thus we need to prepare ourselves to deal with such eventualities. 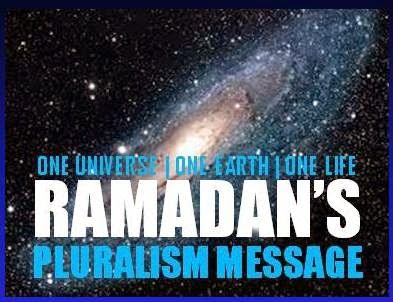 The guidance can be found in every religious tradition; all of them were committed to creating cohesive societies where no one had to live in apprehension or fear of the other.

I am pleased to reiterate the Islamic tradition in this essay.

Quran 49:13 says that God has created us into different tribes, communities and nations. It was indeed his choice to create each one of us to be unique with our own thumbprint, eye print, DNA, color and taste buds. Yet, the whole creation was put together in perfect balance and harmony (55:7); Planets and plants were programmed to operate with precision (Q55:5) year after year, and humans were given a free will with the responsibility to maintain that balance for their own good or perish like the earlier species through climate changes or conflicts.


That brings us to Pluralism which is defined as, “respecting the otherness of the others and accepting the (God-given) uniqueness of each one of us.”  You are who you are, and I am who I am. Q109:6 (Y. Ali), “To you be your Way, and to me mine.”  Your faith is dear to you as mine is to me,  together, we have to live and work on maintaining that harmony for our good and for the creator’s joy. God’s religion is peace.

God knew such diversity is bound to create conflict and mess up the delicate balance, so he encourages us in the same verse 49:13, that the best among you are the ones who know each other. Indeed, knowledge leads to understanding and understanding to acceptance and appreciation of the God given uniqueness of each one of us, and with that conflicts fade and solutions emerge.

Pluralism is not a regulatory system like Secularism, or theocratic governance, but  your choice to have good manners, and  a good attitude towards fellow being as guided by Quran, the Prophet and common sense.

My focus of this essay is application of God’s recommendation “to know each other” within the fold of Islam and with members of diverse family of faiths.

Within the fold of Islam
A majority of us are saddened with the day to day events in the Muslim world, calling each other infidels and killing the other in Iraq, Syria, Afghanistan, Nigeria, Pakistan and elsewhere.  Quran says killing one person is like killing the whole humanity.  You are not to kill a single soul unless it is in self defense. We talk about unity, and spew so much hate for the other in the same breath; it needs to go as God wants peace.

I am appealing to those Muslims who have the integrity to match their words with their actions, and pray for the integrity of others who lack it.

During this Ramadan, please make an effort to do your Iftaar (breaking fast) in every mosque, particularly in the Shia, Sunni, Ahmadiyya and WD Muhammad or at least seek God’s guidance to remove hate and bias from our hearts for each other.  Invite each other, not to discuss differences but to know each other to learn to respect the otherness of others, and accept each other, so that conflicts fade and solutions emerge.

Take some fruits and dates if you have a few dollars or just go there and let the Imam or the volunteers know that you are from a different tradition and making a sincere effort to be part of the larger community in every which way you can.

Over the last four years, I have been to every mosque of every denomination in the United States, except the Nation of Islam, and the Progressive Muslims. Insha Allah, I intend to make the trip to Washington DC or New York.  I have chronicled the uniqueness of each tradition with full respect at RamadanDaily.com.

When you visit your friend’s house, you don’t criticize how they have arranged their furniture; in fact you may reluctantly praise it, but never put it down.  You don’t dare criticize how their kids keep their rooms, eat, wear or talk.  For God’s sake go to other Mosques with the same attitude, the attitude of pluralism.

This year, we have 4 Fridays in Ramadan; make an effort to attend at least four major denominations on each Friday.
Dealing with fellow members of diverse family of faiths;

Prophet Muhammad was called Amin, the trustworthy, truthful, just and around whom people felt secure. We need to be Amins of the society.  We need to have comfortable working relationships with everyone from Atheists to Baha’i, Buddhist, Christians, Hindus, Jains, Jewish, Native Americans, Pagans, Sikh, Wiccan, Zoroastrians and every one in between including fellow Muslims of different denominations. We should not be dumbfounded when it comes to the right knowledge about others, preferably as they express it and not what is dished out to us about them. We ought to take pride in knowing all of God’s creation expressed in different faiths and traditions.
Prophet Muhammad (pbuh) life is a bold example to live civility, openness and with confidence.  He had offered a space in his Mosque for the visiting Christians of Najran to pray after the interfaith dialogue.  Had they prayed, they would have called on Jesus as son of God and Prophet would not have objected it. The greater value he taught was to respect the otherness of others. Remember he also had his signature revised in Hudaybiyyah treaty – From Muhammad (pbuh) Rasool Allah to Muhammad (pbuh) bin Abdullah.  It was to respect the otherness of others.  Let’s follow him and build friendships with people of faiths or no faiths, and become Amins of the Society.

Together as Muslims, let’s make the world a safe and secure place for every one of God’s 7 billion to live cohesively.  Let’s not blame others, but do our share of good in our own Masjids, neighborhoods, communities and towns on a smaller level.  This is our home.

Mike Ghouse is a speaker, author and thinker, and heads the World Muslim Congress, a think tank committed to nurturing the pluralistic values of Islam, as well as the Foundation for Pluralism, educating about Pluralism.  | More about Ramadan at  www.RamadanExclusive.com
Posted by Mike Ghouse at 11:44 AM