Congresswoman Eddie Bernice Johnson of Texas presided over the proceedings of the 16th annual thanksgiving celebrations and awards night on Saturday, November 22, 2014. It is a bridge building event between communities.


We ought to be thankful to Native Americans, who did not put the electric fence around Americas to keep the illegal aliens like Columbus and other Europeans from entering America without a visa.  Today, we are a nation of immigrants, other than the natives; almost all of us are immigrants from one to several generations. 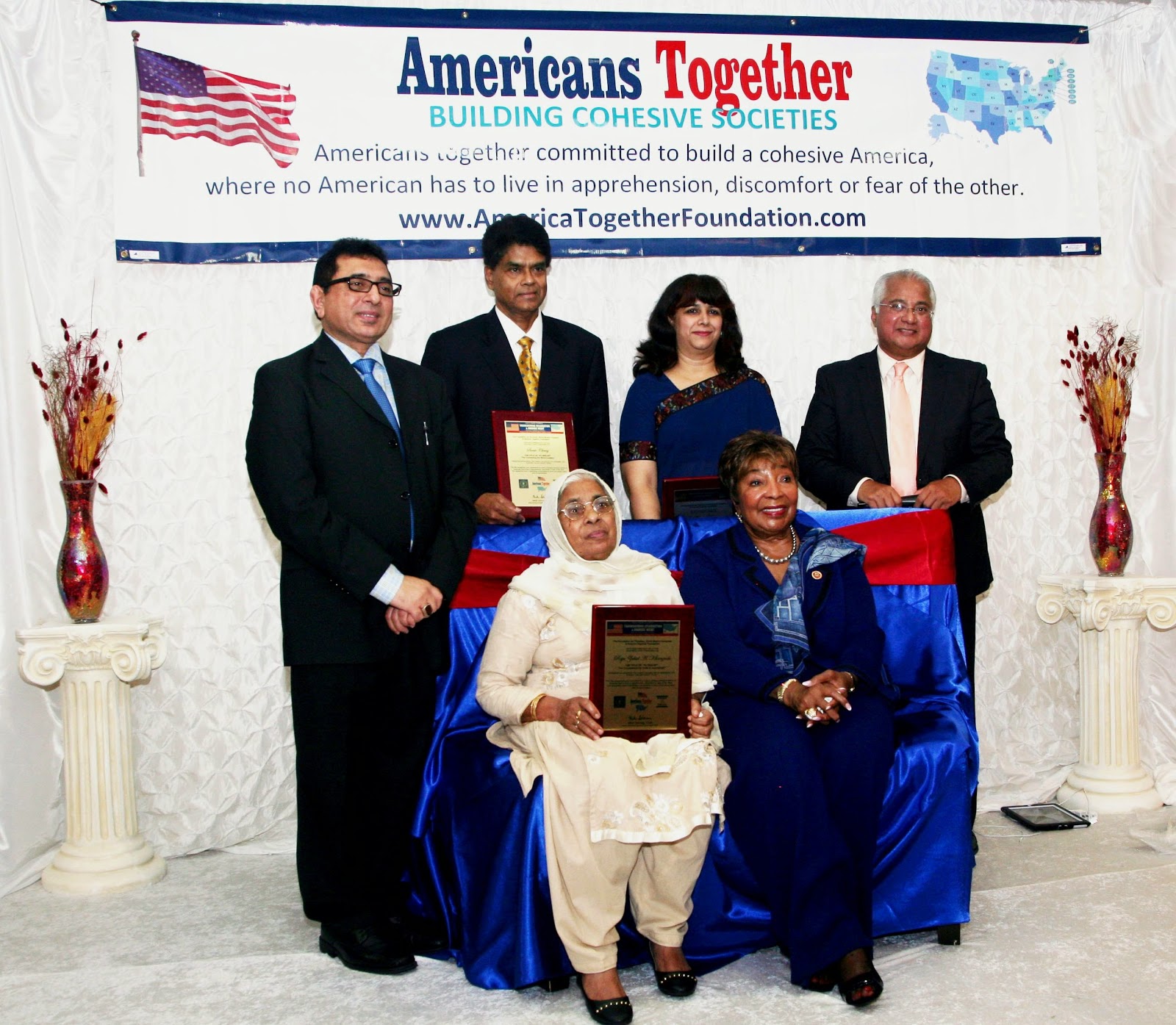 The event was organized by America Together Foundation, World Muslim Congress. And the Foundation for Pluralism, all committed to building a cohesive America where no American has to live in tension, discomfort, apprehension or fear of the other.
The purpose of celebrating this event was to thank God for guiding us to learn to respect the otherness of others, and accept the God given uniqueness of each one of us.  And more importantly it is to familiarize the new immigrants with the festivities.  You’ll be surprised to find that many of them have not even seen the thanksgiving meal and its fixings. It was not a part of their study for citizenship and apparently no one has done this as a public event.
“Congresswoman Johnson represents the aspiration of fellow Americans; justice and liberty for every American in his or her pursuit of happiness, and she fights for that relentlessly – Is that the kind of congressperson we want?, well here she is.” Mike Ghouse welcomed her amidst a thunderous applause. 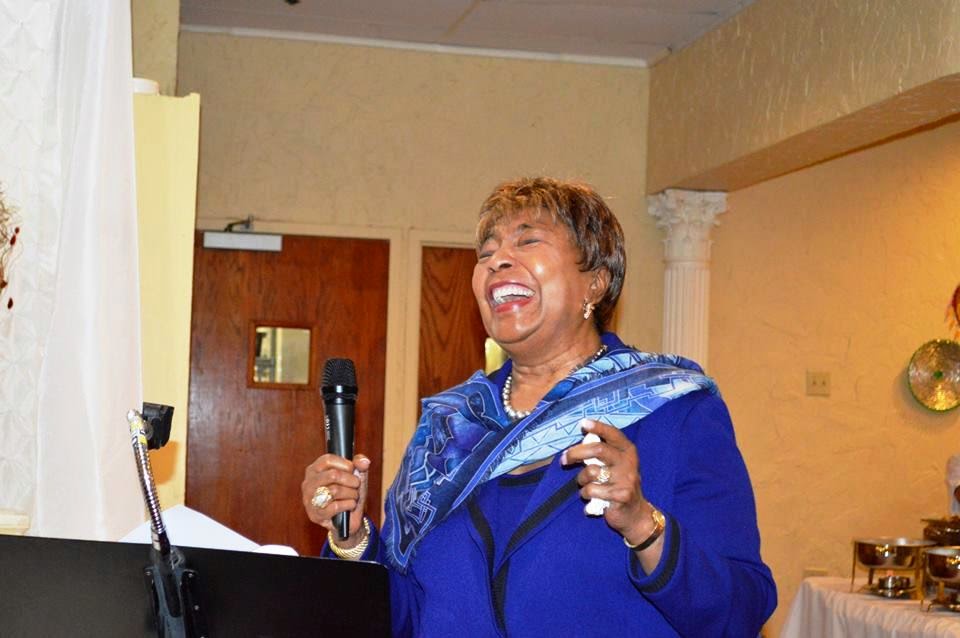 To paraphrase Congresswoman Johnson, “we have made sacrifices to respect the human rights, civil liberties and freedom for our new generations and now they have those rights.   On the map of the world, ours is still the best country.  The immigrant community has always played an important role in the development of US."

It was a delight to watch the Congresswoman carve the symbolic turkey, and sharing what thanksgiving means to her; to count your blessings.  For many a immigrants it is an introduction to the American way of life and who else can do a better job than the Congresswoman? Through her efforts and against all impediments, she has realized her American dream. 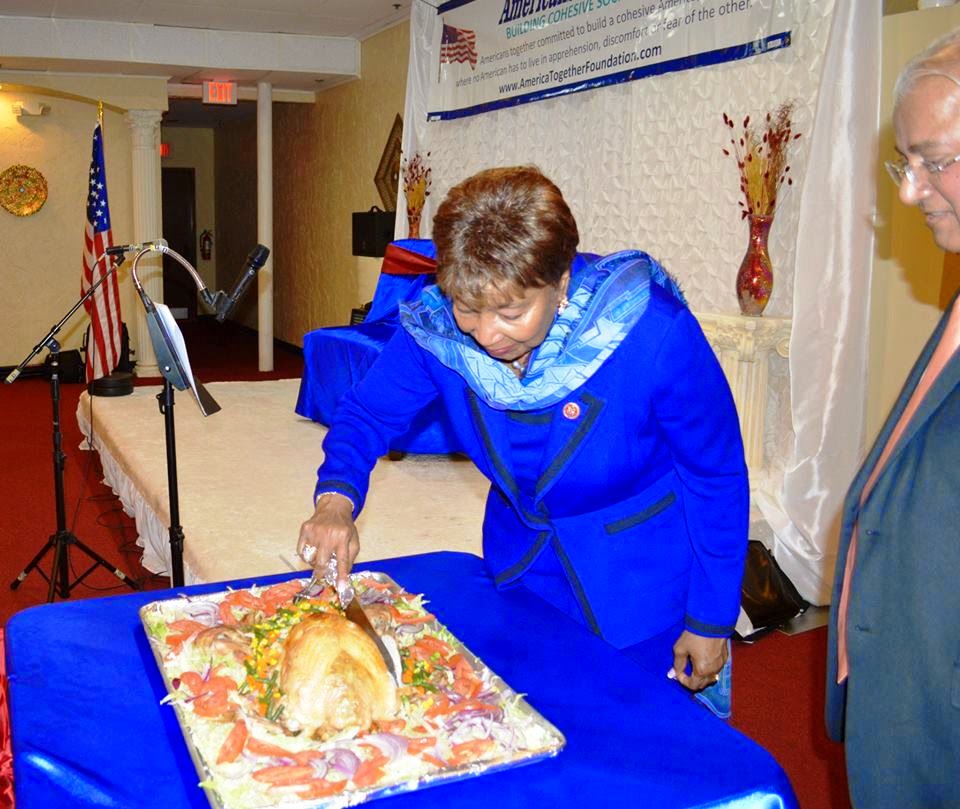 Chef Ali of Spicy Cuisine in Irving prepared delicious vegetarian and non-veg meals with a fixing of thanksgiving delicacies.

Congresswoman Johnson presented the awards to four community leaders and delivered a beautiful keynote address on gratitude,while highlighting the need for events like this to bring people together regardless of their political, religious, racial or and social affiliation to build a safe, secure and a cohesive America. 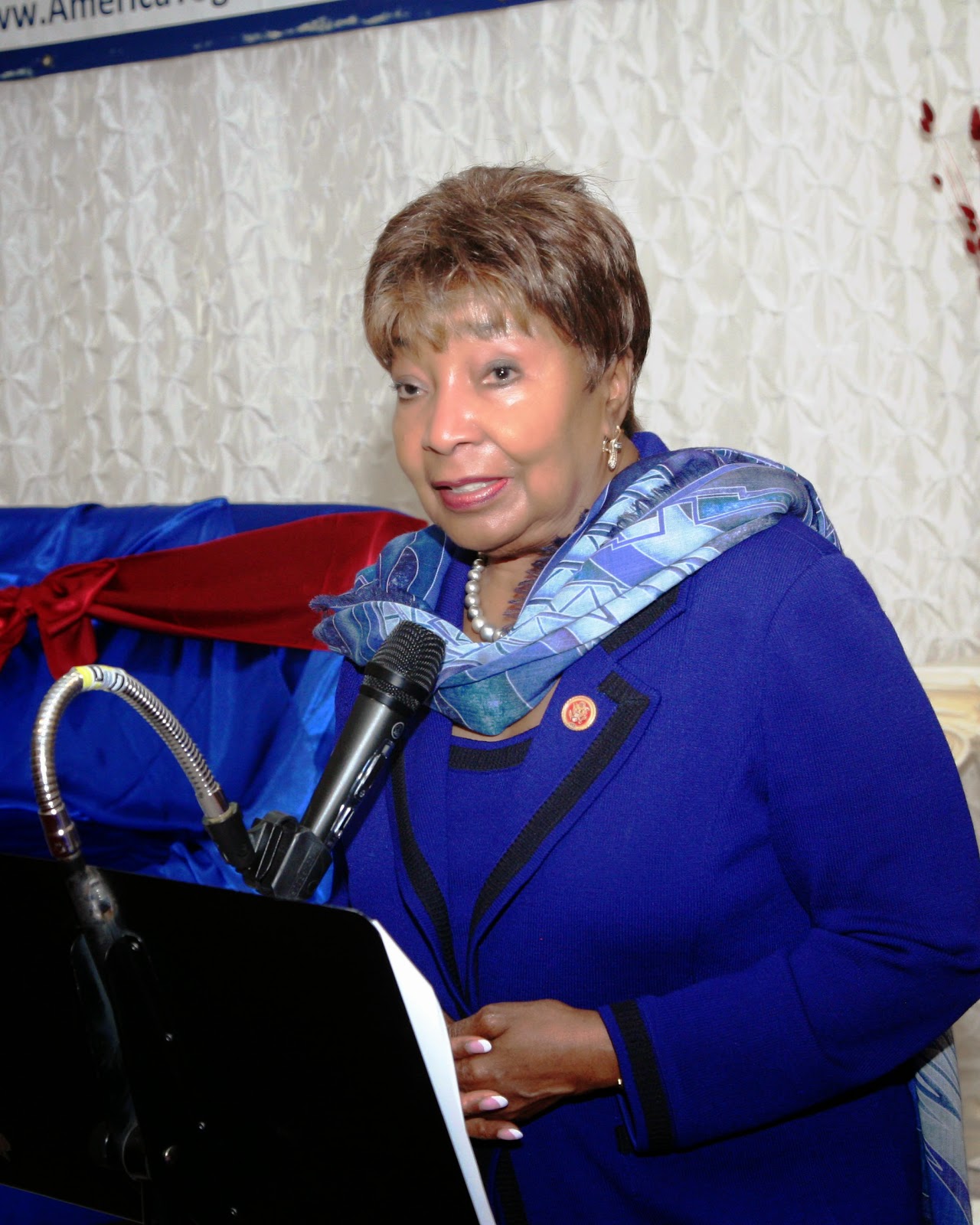 Mike Ghouse, president of the foundation shared the real life stories that exemplify thanksgiving; stories about Appaiah and the hospitality in Saudi Arabia. How each one of us can restore the spiritual balance within and live a productive, meaningful and a purposeful life. The Appaiah story was published in Huffington Post Link , and the Saudi story, all pictures, and notes will be atwww.ThanksgivingCelebrations.org

The attendees were represented by people of different faiths, races, political orientations and other uniqueness’s. They cheered on when Mike Ghouse, chair of the event asked. Whether you are Jewish, Hindu, Muslim, Gay, Lesbian, Black, White, Native, Immigrant, Republican or Democrat, how many of you like to see your Congress person represent you with equal care and consideration? How many of you would like to see your congress person treat you with dignity and respect regardless of who you are?  Well here she is, Congresswoman Eddie Bernice Johnson.”She delivered a beautiful key note speech about Gratitude.

The following individuals were recognized for their outstanding contributions to building bridges in the communities we live – the title conferred upon all of them was “Pluralist” – meaning someone who respects the otherness of others.Every society has heroes – that is men and women who have gone beyond their normal self to serve the communities at large, and it is our responsibility as a society to acknowledge, cherish and honor them.

Here is a brief introduction of the recipients; detail profiles will be available at www.thanksgivingcelebrations.org
Raja Zahid A. Khanzada – a Journalist for his “Commitment to truth in Journalism.” He reports for the top news media conglomerates in Pakistan and has been a catalyst in a process of “forgiveness” of the robbers – where they surrendered their guns in return for acceptance in the society to live and breathe a normal life, and be the contributors of the nation. It is sort of what President Obama is doing with the undocumented aliens, a noble thing to do.  Raja is a relentless pursuer of education with three Master’s degrees and a degree in Homeopathic medical sciences and holds certification from American Alternative Medicine Practitioner Board in practice of alternative medicine.  He amazed everyone when he asked his mother to receive the plaque. 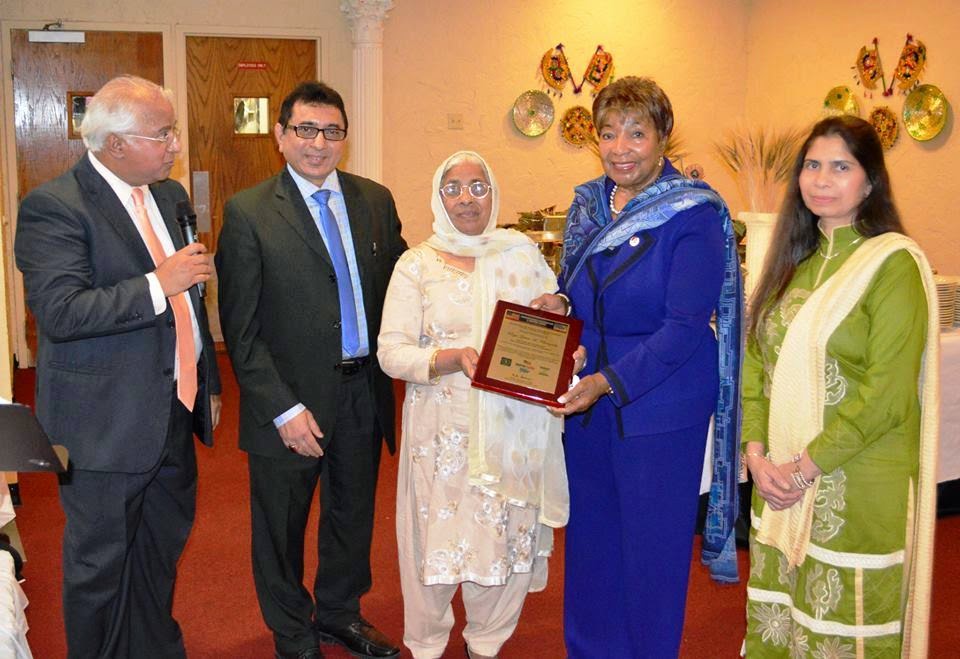 Amina Rab – a community activist and leader for “Building Bridges.” Amina is deeply committed to building bridges between the Muslim community and other communities.  It is not her job, but a passion to build bridges. She is the President of the Council on American Islamic Relations- DFW chapter and is the first woman to serve on the North Texas Islamic Council, and is a founding Board member of Texas Muslim Women’s Foundation.   She is a Scientist in the healthcare industry for 20 years.  Amina is an entrepreneur with a home based business, a mother, a grandmother and a community Activist with a passion to promote peace and justice in the world. 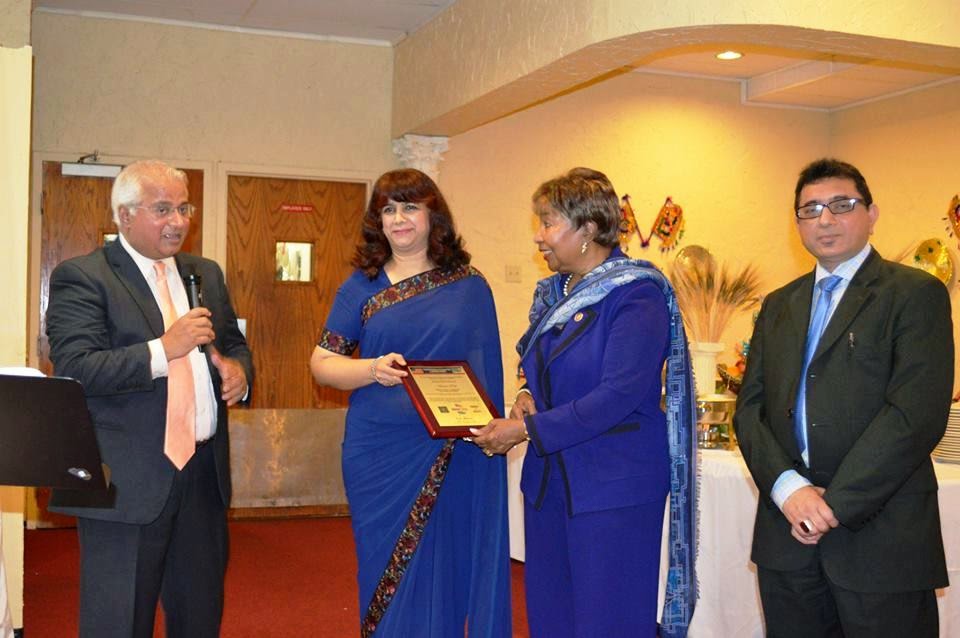 Anne Marie Weiss – a community leader for “Bringing the DFW communities together.”  Anne Marie single handedly started the DFW international in early nineties – she had the vision for making the Dallas/ Fort worth an international Metroplex, even before it was declared as such.  Today, DFW International has become an exemplary institution in America. There is nothing like it.  Where can you find connections to every cultural, religious, social and ethnic group in one place? None in America! She has put Dallas Fort Worth on the world Map. If you see the demographic statistics of nationalities and ethnicities in Dallas, it was her effort.  It is her selfless devotion to the belief that DFW should genuinely reflect its diversity.

Sante Santhanam Chary –is a national figure in “Connecting the World Leaders.” Sante is one of the very few Americans, perhaps the only immigrant who has met, shook hands and shared a message with 7 American Presidents and 8 Indian Presidents/Prime Ministers. Sante is continuously forging political and business ties between the United States and India and in September this year, he got the US Senate to pass a resolution creating “2014 U.S.-India Partnership Day” to honor Prime Minister Narendra Modi’s visit to the US.

He has set a new world record by collecting over 55 contemporary signatures in solidarity on a USPS issued First Day Envelope with Mahatma Gandhi’s stamp on it. Sante is a healthcare entrepreneur with a focus on physician staffing services to small towns in the US.  He is a graduate of The Harvard Business School and the Thomas Jefferson School of Law. 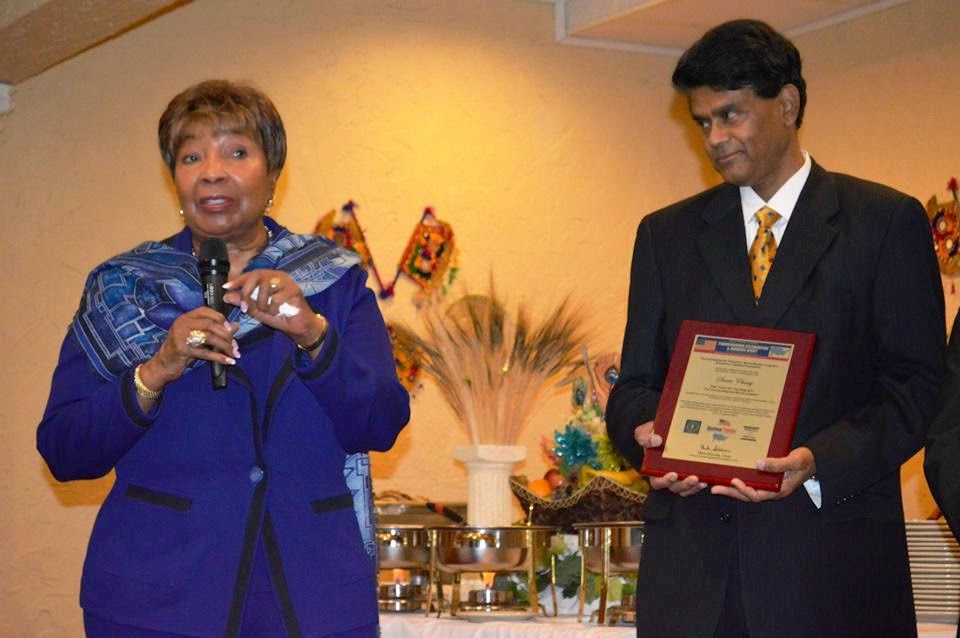 We are one nation.

Collectively, we are one nation under God represented by every race, religion, political orientation, nationality, ethnicity, language, sexual orientation and culture. Everything that God has created in the universe, we have it here in America. Indeed, we are God’s own country.

As Americans together, we see God as one, none and many and in every form; male, female, genderless and non-existent, being and non-being, nameless and with innumerable names. Our organization, America together Foundation is committed to preserve this pluralistic heritage of America.
Most of the problems we have in our nation can be traced to one thing – not knowing and being judgmental about others. Whether it is Ferguson, Homophobia, Anti-Semitism, Islamophobia, Misogyny or whatever evils creep on us, they gain ground because we don’t know each other.

How do we come out of these and create a cohesive nation where no one has to live in apprehension, discomfort or fear of the other? At America Together foundation we have plans to bring about this change.

A full report with speeches and pictures will be published in a week. 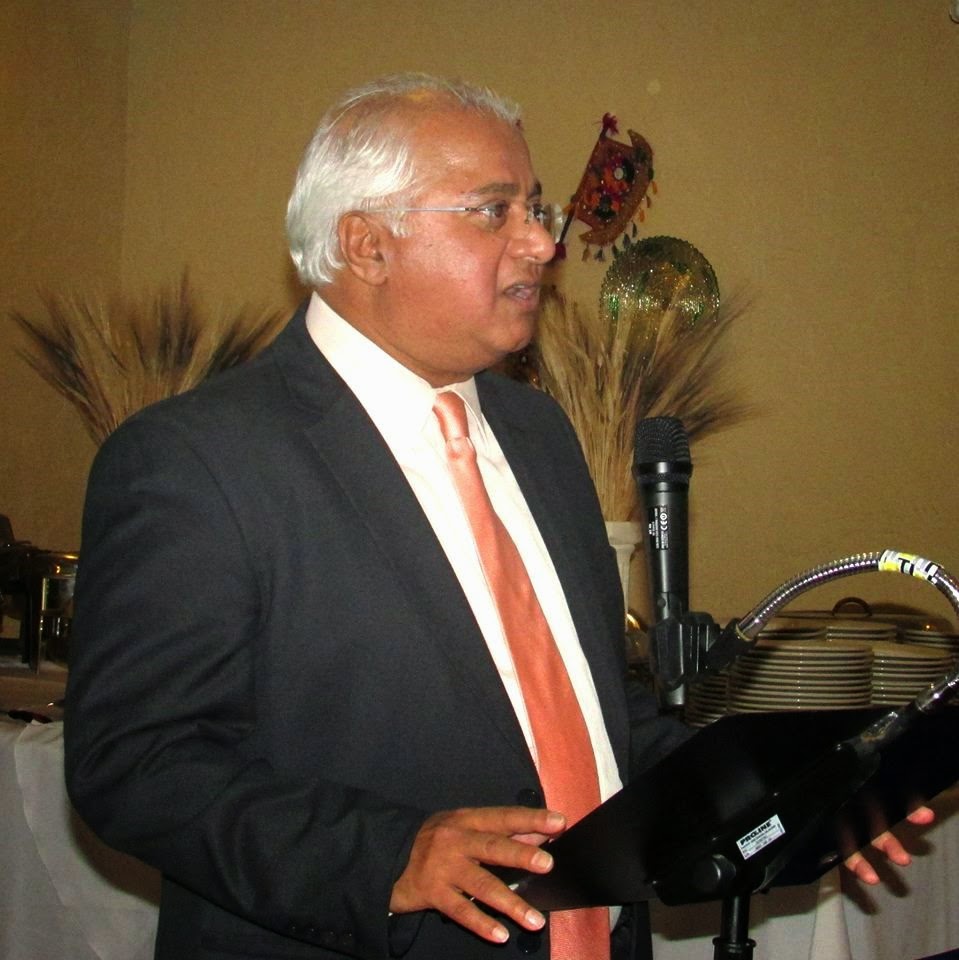