I am pleased to share a few notes for your joyful reading on this auspicious day, when more than half of the world population is praising two men who brought the message of peace to the world, and who wanted the world to live in harmony and balance between each other and their environment.

1. Holiday Reading
2. Joan and Katherine made my day
3. What is Pluralism?
4. Invitation to a historic event
5. How can you help?


The current world population is 7.3 Billion,  and the Christians and Muslims together add up to 3.9 Billion (2.2 Billion Christians and 1.7 billion Muslims ). God places a huge responsibility on our shoulders to keep the world intact, they way he created, with all elements of the creation functioning together cohesively. We have an obligation to create safe and secure societies for all of us, every human, where everyone minds his own unique life (be it social, cultural, spiritual or religious) but yet nurtures the connectivity of all beings. At American Muslim Institution, we take this responsibility seriously and will take the initiatives to forge the ideals of one nation, indivisible with liberty and justice for all. We are committed to a cohesive and safe America for everyone.

To understand a cohesive world, our bodies are an example. Each organ of our body system is interconnected, and the heart, brain, kidneys, lungs, liver, stomach and anus are all coded to work with each other, no organ is superior to the other and all are equally partners in our system.  If one element malfunctions, or loses its balance, it will affect the normal functioning of all. That is how God created a cohesive universe, and the cohesive planet earth, where life, matter and environment function together in balance.  If we lose any balance, we mess up our own safeness.

Chief Seattle, a Native American said this perfectly, “All things are connected. Whatever befalls the earth befalls the sons of the earth. Man did not weave the web of life; he is merely a strand in it. Whatever he does to the webs, he does it to himself."

Both Jesus and Muhammad created a vision of such a cohesive world in the form of heaven, where every soul would live in eternal bliss, a conflict free zone, living their own bliss and letting others live theirs.  This vision is expressed in the form of Pluralism, an attitude of respecting the otherness of others and accepting the God given uniqueness of each one of us, and when we reach that level of integrity in our attitudes,  conflicts fade and solutions emerge,  and that was their vision.

I call Jesus, the first pluralist in the world and Muhammad the second one sequentially. Indeed, both the men were (are) a mercy to mankind.  Neither of them was needed, if the world was created to be 100% perfect, the world is indeed built-in with 1/10th of 1% of extremity or anomaly, that is capable of messing the balance of the entire 99 - 9/10th of the world. One embraced the diversity of God’s creation and the other prayed for the ignorance embedded within others.  Together they offered solutions to restore the world through forgiveness, humility, kindness, justness and acceptance of the otherness of others.

The other half of the population is guided by great men like Zarathustra,  Moses,  Krishna, Rama, Buddha, Confucius, Mahavir, Nanak, Bahaullah and a host of others from the native and earth based traditions including those who do not believe in a defined God, but advocate creating balance in the society.  All of spiritual masters taught us to be kind and gentle to the fringe among us.  Each one of them taught to respect the sanctity of life.  A majority of us get that right and the fringe among us don’t, and it is our duty to include them kindly and gently to be a part of the norm as Jesus did.

Joan and Katherine made my day!
While driving to Staples this morning to pick up the banner for the event on Saturday, I got a call from a Katherine, she seemed so happy about the joint birth celebration of Jesus and Muhammad (pbuh)  that I had to pull over to listen to her sentiments and what a joy it was to hear her out.  She said, she sees hope, when the people of two of the largest religions come together to create harmony in the world. She was full of praise for Rizwan Jaka, the chairman of the board of trustees for ADAMS center.  It was indeed a joy to know the work of Rizwan and his entire team at ADAMS center in creating such a cohesive environment.

I reached Staples, and had to wait, while waiting, I opened the email, the first one was from Joan Greenbaum, and it read, “And thank you for the invitation and honor to be a part of the Season of Peace celebration.  My hope is that the celebrations of the births of these two men, who were instrumental in teaching all of us about peace and humanity, will remind those who have lost sight of our shared heritage, that we are all children of God.  And remind them that we want a civil society that values all.”


Both of them made my day! They were good positive voices and notes. I was excited and had to call in my friends, as many as I can, including  Ambassador Islam Siddiqui and Dr. Aquilur Rahman, President and Chairman of AMI respectively, and who inspire me to do more, but then I did not call other friends as I got tied up on the phone. Thanks to my board of Directors at AMI who encourage me and are committed to a beautiful America.
There is more! The Muslim community in Washington, DC has done a great job in building relationship with members of the families of faiths. As we have done in Dallas with so many events from the Foundation for Pluralism, America Together Foundation, Irving Mosque, The Islamic Center of Richardson and others. Louisville Kentucky has also set a great example, and the Phoenix people have set a record in turning hostility into friendliness with the armed protesters.

Indeed, we are doing the right things; we need to continue doing them as the work is not a match for the gravity of the negativity out there.  That negativity can be minimized by doing more interfaith understanding.

I appeal to those few Muslims among us to seriously look at the larger picture and examples of the prophet and his work.  He was the first man in the universe to conduct interfaith dialogue, right in his Mosque; this is a great Sunnah we need to follow.  He was Amin (a great citizen who is trust worthy, truthful, just, and kind with no barriers between him and God’s creation) first, and that is what we have to work on, to be the Amins, the great citizens of this nation,  and all else will fall in its place.

Thank God, over the last 22 years, I am blessed to have written over 3000 articles, and ahve given innumerable talks. Of them, 1000 were on every aspect of Islam, a thousand on politics, foreign policy, sports, movies, personalities etc and a 1000 about Pluralism.  I am also blessed to have many friends from every faith (including Atheists) cultural, social and racial and ethnic traditions.

We have crystallized the definition of pluralism to, “respecting the otherness of the others and accepting the uniqueness of each one of us”. Pluralism is nothing but an attitude of live and let live, and it is applicable in every aspect of life including culture, society, religion, politics, gender, food, ethnicity, race and other uniqueness’s.

By the end of 2020, there will not be a major city in America, and perhaps in the world, where you will not find people of different faiths, cultures, ethnicities, races, nationalities and social backgrounds working, eating, playing, marrying, and doing things together.

We need to prepare ourselves for those eventualities to prevent possible conflicts, and lay a good foundation for nurturing goodwill and effective functioning of the societies. Exclusive communities will become a thing of the past.  If you live amidst others, you must also respect the otherness of others, as you expect them to do the same for you.
You are who you are, and I am who I am. As long as we don't mess with each other’s space, sustenance and nurturence, and mind our own business, we all will do well.  If we can learn to respect the otherness of other and accept the God-given uniqueness of each one of the seven billion of us, then conflicts fade and solutions emerge.

You are responsible for other’s actions but your own. Internally it will burn you inside; externally you’ll be punished by the society. No one but you should be blamed for your actions. If you murder someone, it’s you, who needs to be hauled off, not your parents, spouse, siblings, or your children. If you are a rapist, it is you who needs to be punished and not your teacher, mayor, congressman, senator, imam, pastor, pundit, rabbi, shaman, clergy, Quran, Bible, Torah, Avesta, Bhagvad Gita, Guru Granth Saheb, Kitab al Muqaddas and other holy books of any religion for that matter.

Pluralism is not a set of rules, it is simply an attitude of live and let live religiously, politically, culturally and socially.  We are committed to building cohesive societies, where no human has to live in apprehension, discomfort or fear of a fellow being.

Invitation
"To a historic event"
It is for the first time in history of Christianity and Islam, that Muslims and Christians are celebrating the birth of Jesus and Prophet Muhammad on the yet another historic place; the steps of Lincoln Memorial in Washington, D.C.

Saturday, December 26, 2015 at 1:00 PM
Enjoy the Christmas Carols & Milad Nasheeds
Bring your own chair and an umbrella 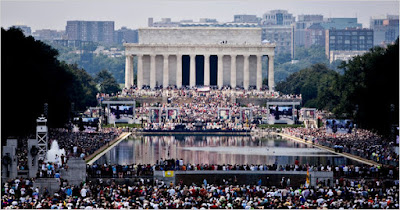 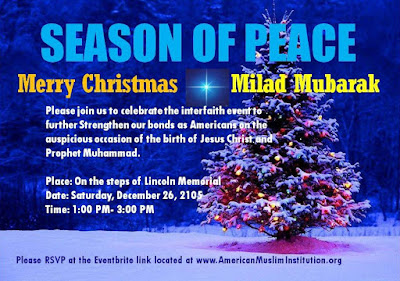 Its an interfaith event supported by many organizations.
Details at: http://americanmusliminstitution.blogspot.com/2015/12/season-of-peace-joint-celebration-of.html

How can you help?

1. First attend the event on Saturday and invite your friends to join.
2. Write a heart felt note, why is it necessary to know each other**
3. Depending on the time, I may record your 1 Minute speech as a feed back of the event.
4. Donate if you can.

We have a lot more work to do to build a cohesive America where no American has to live in apprehension or fear of the other. To do this work, takes money, and we invite you to seriously your tax deductible donations to American Muslim Institution, 110 Maryland Av, NE, Suite 508, Washington, DC 2002.

If you wish to read more about these two guys:

Thank you,
Dr. Mike Ghouse is a community consultant, social scientist, thinker, writer, news maker, and a speaker on Pluralism, Interfaith, Islam, politics, human rights, India, Israel-Palestine Terrorism and foreign policy. Over 3000 Articles have been published on the subjects. He is committed to building cohesive societies and offers pluralistic solutions on issues of the day. More about him in 63 links at www.MikeGhouse.net and bulk of his writings are at TheGhousediary.com

** send the note to MikeGhouse@aol.com
Posted by Mike Ghouse at 1:09 PM