THE PLAN: Iftaar at a mosque from every denomination including: Ahmadiyya, Bohra, Ismaili, Shia, Sufi, Sunni, Warith Deen Muhammad, Wahabbi and others. You are welcome to join me or experience it yourselves, we have to learn to respect the differences and appreciate the uniqueness of each tradition. God says the best among you is the one who knows each other for peaceful co-existence.

God willing, I will highlight the uniqueness of each tradition on a daily basis and I hope we as Muslims can cherish it. I encourage each one of you to experience it and write about it. 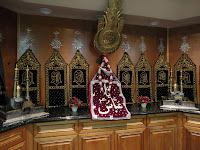 Praise the lord, they have expanded the Shia Mosque in Irving, it’s almost double the size from last year and they have added a room, a beautiful sanctuary with hardwood floors. Several picture frames were set on the wooden cabinets with the names of twelve Imams in the Shia tradition with the name of Abbas son of ‘Alī ibn Abī Tālib (first Shi'a Imam and fourth Rashidun Caliph) placed prominently in the middle and a brass plate with hand symbols hung in the middle. I believe they call the sanctuary the Imam Bara. I just could not resist noting my Dad’s election symbol which was the hand when he ran for the Mayor of Yelahanka Town Municipality in the early fifties. 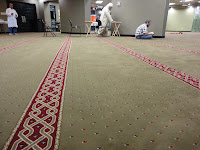 Of all the Mosques I have been to, this Mosque has the best carpet with inlaid design for the prayer rows demarcations, and I loved the color of the carpet – it’s kind of greenish Khaki. Mujahid, one of the leaders of the community said that it was imported from Turkey and they had placed heavy padding under the carpet. Indeed, it was a luxury to sit on that carpet. 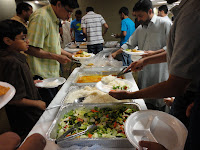 The breaking of fast occurs nearly 20 minutes after the sunset; the dusk is interpreted as the disappearance of light after the sunset an uniquely Shia Tradition. The fast ends with Azan (Adhan) the prayer call and everyone breaks the fast with dates and other refreshments, water or the Milk followed by the prayers. The Iftaar dinner is after the prayers and they had the delicious Chicken Korma (curry) that reminded me of my Taiba Uncle's curry, which will never fade out of my memory. Apparently it was cooked by the Aunt of Abbas a friend I have known for nearly 16 years. Compliments to her for the wonderful Chicken Korma.

The 2nd Prayer call is to gather the worshippers for the ritual prayer called Namaz or Salat. During this call, when the name of the Prophet Muhammad is recited, the Muezzin (the reciter) and the congregation both recite the full Darood (Peace prayer to the Prophet and his progeny). This practice is unique to the Shia branch of Islam.

As the people gather up, the prayer begins, unlike the Sunni Mosques where the Imam invariably asks the congregation to stand in straight lines and shoulder to shoulder, this Mosque assumed that they do and did not make the call.

Another unique item is the biscuit size round clay tablets placed on the floor to rest the forehead during the prostration posture.

As the prayer begins, the worshippers drop their hands to their sides while the Sunnis bring their folded hands together on the abdomen. At the end of the recitation of first chapter of Quraan, the word “Amen” is uttered silently.

During the Ruku (kneeling) the Imam (prayer leader) recites out in audible voice the name of God three times along with sending peace and blessings (darood) to the Prophet, a Shia Tradition. The process is repeated during the prostration as well.

On the 2nd Unit of the prayers, in the standing position, after reciting the first chapter of Quraan and an additional chapter, the Shias lift their hands and do the supplication prayers, the only other place I have seen that practice is at the Al-Aqsa Mosque in Jerusalem. Finally at the end of the 3rd Unit of prayer – they do not turn their head to the right or the left while saying As-salaamu aliakum o Rahmatullah as the Sunnis do. 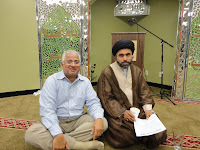 During the month of Ramadan, most mosques bring guest Imams and here at the Momin Center, Imam Nabi Raza was visiting from San Jose, California. He is from Richmond Town, Bangalore, and a fellow Bangalorean and has been in the states for nearly 20 years. He was excited about my visit to every mosque during Ramadan so we can learn to respect the uniqueness of each tradition. He talked about the extensive programs they have in the bay area Mosques where all the Sunnis and Shias gather up on occasions. He mentioned that they gather up 15-20,000 Audience in Bangalore to celebrate Prophet’s birthday (Maulood, Milaad). Insha Allah, God willing we may coordinate visiting Bangalore as I give a talk “Prophet the peace maker” every act of the prophet had one thing in common – conflict mitigations and goodwill nurturance.

يَا أَيُّهَا الَّذِينَ آمَنُواْ كُتِبَ عَلَيْكُمُ الصِّيَامُ كَمَا كُتِبَ عَلَى الَّذِينَ مِن قَبْلِكُمْ لَعَلَّكُمْ تَتَّقُونَ (2:183)
2:183 (Asad) O YOU who have attained to faith! Fasting is ordained for you as it was ordained for those before you, so that you might remain conscious of God: -
He talked about what constitutes Muttaqeen, the pious one and he honed on Hazrat Ali’s speech, the number one item (of the 101) is to “speak precisely and to the point” He referenced Prophet Muhammad’s saying where he had said, the most important gift to human beings is intelligence and the tongue (ability to speak) and must be used discreetly, as it is the tongue that can hurt others, can bring troubles in the communities and families. 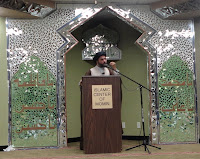 One of the final attainments in the stage of piety is the ability to receive guidance from God – he used the word Wahi, the revelations. When you have achieved the purity of your being, all that comes to you is God’s wisdom. Indeed, I believe in that as the Sufis do and most Christians subscribe to that whereas it is not a part the Sunni tradition.

The most appealing item of his talk was – God does not need your prayers or fasting, it’s for your benefit that you do. He said if all the humanity abandons God, it does not make any difference to him, or if the whole humanity worships him every minute of the day, it does not make any difference to him, we are a speck (Carl Sagan?) in his unlimited Universe. Indeed the Bhagvad Gita says, even serving others, helping other is for selfish reason; it is an act of self preservation and self balancing. Just the other day, I was sharing with a few friends that I am a Muslim for me and not for anyone else. Several of my Sunni friends attempted to correct me – You are a Muslim for the sake of God. I reiterate that I am a Muslim to be in tune with the universe to seek my own balance in the whole.
Islam is not a monolithic religion and it will take another generation of constant exposure for Muslims to learn to accept and respect the otherness of other. The same goes with the Christian denominations, they are in the same boat of not accepting the other denominations as legitimate and you will find that in every religious tradition. That is not religion; religion is indeed about humility and not arrogance. Together we all have to grow up to enjoy the beauty of humility and valuing the God given uniqueness of each one of us.

Sawm - fasting from sunrise to sunset - No food, no water, no nothing and no intake of any food or water. More critically it is a practice to abstain from ill-will, malice, anger, temptations and human desires. Don't hear, see, speak or act less than goodness.

Rituals - There are several variations in rituals and they vary from place to place. In Bangalore where I am from, the whole family gets up early around 4:00 AM and together cook extensive meals for Sahri /Suhoor, while others choose to cook earlier night and just warm it up and eat in the morning. The Iftaar is done elaborately at mosques, homes or other gatherings where friends from different faiths are invited to break bread and nurture goodwill.
Posted by Mike Ghouse at 11:20 PM