At this point in history, the Shia and Ahmadiyya Muslims in particular are living in fear about their next day and the lives of their kith and kin, and the Hindu, Christian and other minorities have been living in fear for a long time.  It is painful to see Islam, the religion of peace shredded into pieces by its followers. Of course, it is not Islam; it is a few men and women who call themselves Muslims are the culprits, and are terrorizing the minorities while the good for nothing majority looks on. 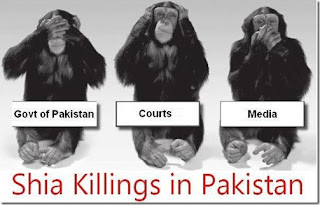 Responsibility for peace falls squarely on Sunnis. What can we do?

9 suggestions are presented, and one among them is for Sunni Muslims to go to the Shia and Ahmadiyya Mosques and join them for Friday prayers, we don’t need to give a talk or say anything, and just our presence will do. Let the Imam know that we are attending it as an expression of our support.  We don’t even have to say a thing, just pray with them and quietly walk out; this is how we can awaken our own humanity in us.


To find a Shia Mosque anywhere in the United States go to http://www.islamicfinder.org/  and in Dallas, go to www.DallasMuslimCenter.com


As an activist of peace and pluralism, I am doing this to make my words mean something. When I say I am committed to do my share of work in building cohesive societies within the fold of Islam and with the humanity, I mean it, and no one can call me a bullshitter. If you are the one who talks about unity of Muslim Ummah, please mean it and don’t bullshit about Unity.


The least we the Sunni Muslims around the world can do is to lend  our support to Shia Muslims at this time, but Ahmadiyya, Hindu and Christian minorities for all times to come, so they can feel secure that the ordinary average Sunnis are with them and for their safety.


If you wish to receive a copy of the article pending publication, please send me an email explaining what you have on your mind to bring about a change.

It will be Insha Allah published at Huffington Post at: http://www.huffingtonpost.com/mike-ghouse


Hunting down Shia Muslims, what next?
http://www.worldmuslimcongress.blogspot.com/2013/03/hunting-down-shias-societys-deafening.html

KARACHI: Hauled off buses, targeted in their clinics, on boulevards, in alleys, in shops, in offices, in processions and pilgrimages, is there any place left safe for Shias in Pakistan? At Ashura, they were chastised for taking out Moharram processions and giving terrorists an open field in which to attack. http://dawn.com/2013/03/04/hunting-down-shias-societys-deafening-silence/

Muslims Condemn Zardari Government for not protecting the Shia ...
“We condemn the harassment and killings of Shia and Ahmadiyya Pakistanis by Sunni Pakistanis. The Jhangvi leaders are saying they will kill more Shias, and are walking around like the beasts on prowl. http://worldmuslimcongress.blogspot.com/2013/02/muslims-condemn-zardari-government-for.html
Here are the three report about a Shia-Sunni-Ahmadi Dialogue
Posted by Mike Ghouse at 6:38 PM