First of all Memri-TV focuses on making their money by  providing entertainment based in making fun of Arabs in particular, and Muslims in general. They pick some idiot in some corner of the Middle East and present him as the main stream Muslim leader. Unfortunately for many who don't question, this looks like the view of all Muslims, because it is coming from “Memri Research Institute,” Baloney!  It is not the view of Muslims.

The talk about virgins is a fantasy of impotent men to live off in an elusive world.  They have fired up their own imaginations with endless sexual appetite, that they don't have it.  It is just not a few random Muslim clerics, but it is the fantasy of men from different races, ethnicities and religions,   men who are disappointed in their own manhood. The ugly fact of this story is, what these guys are talking about is in the literature,  just like the hard core pornographic magazines in American society are available, there is hard core literature among a few Muslim clerics– which does not represent the values of Islam. Even though most Muslims do not subscribe to this, they are afraid to question. 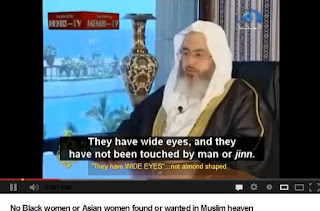 
I am glad I ran into this video because of 2nd part of this video: Mirza Tahir Ahmad interprets this as fantasy – he talks about “hoor” as an ideal man and woman in paradise free from the cycles of desires and satisfaction. Pleasure is a mental thing. I like his interpretation and response, except one small thing: The way he compares spicy Asian foods to the “tasteless” western food.  If he can improve on that comparison without the tone of denigration, I would pass this as an educational video.

Is it possible he is talking about the abstract ideals?
When the cleric in firs video talks about women should look at their men only, is he talking about super focused relationship with total loyalty? - It should have been vice versa also which the misogynistic idiot refuses to see.

When he talks about the strength of 1000 men, (in the 3rd video, the guy talks about 100 men) is he talking about what guys dream about in a relationship to please the woman sexually?

It sounds like fantasy of impotent men. Impotency is not derogatory, some men like this sheikh really believe in fantasy of being a potent man in that elusive paradise.
Are these guys transferring the ideal of this world- good sex, loyalty and exclusivity which they may not have to the fantasy of Paradise? Is their paradise a fantasy of day dreaming, that they consider being real and looking forward to it.

As a Muslim, these videos are repulsive to me, they denigrate women. It’s not just a few Muslims who do this; it is by insecure men in all societies, faiths and races.

Mike Ghouse is a thinker, writer and a speaker on pluralism, interfaith, Islam, politics and building civil societies and offers pluralistic solutions on issues of the day.www.MikeGhouse.net and www.TheGhousediary.com
Posted by Mike Ghouse at 11:08 AM