Sharia Law: Not in America

This may be bad news for the likes of Bridgette Gabriel, Glenn Beck, Sarah Palin, John Hagee and a host of other right-wingers, who thrive on selling hate and painting chaotic scenarios. It will hurt their sales and affect their cash flow. They cannot dupe Americans with unsubstantiated and statistically insignificant claims. Americans are trained to see another point of view and to be non-judgmental.

A majority of Muslims (Moderates/Middle path that the Prophet suggested) will feel comfortable with this piece. However, a few need some time to absorb this.
Sharia in its simplest form is a how-to manual based on the Qur'an and the Hadith (Prophet Muhammad's sayings). It is a human effort to understand the concept of justice enshrined in the Qur'an for day-to-day living. American Muslims have placed their trust in the American justice system and will continue to oppose the Public Sharia laws as they are currently applied in many places across the globe. I will be one of the first ones, if not the first one, to stand up against it. The Muslim majority in America is happy with the American system and does not want to have Sharia law here in America.

Full Article at: http://www.huffingtonpost.com/mike-ghouse/sharia-law-not-in-america_b_653250.html
Posted by Mike Ghouse at 8:56 PM No comments: 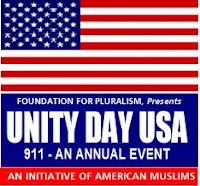 We are pleased to invite you to Unity Day USA; a purposeful event to bring Americans together. The idea for Unity Day USA was first conceived on Tuesday, September 11, 2001 and took its current form on Sunday, September 11, 2005. We cannot let things happen and drift into the abyss of incoherence. It is an initiative to come together to stand up for the safety, security and cohesiveness of America.

Continued: http://911unitydayusa.blogspot.com/
Posted by Mike Ghouse at 3:42 AM No comments: