Since 9/11, talk show hosts, journalists, lawmakers, interfaith authorities and thought leaders have asked: “Who are the authentic moderates of Islam?” Where are moderate Muslims to join the debate on social, civic, religious and political issues, including racism and violent extremism? And, “Who speaks for American Muslims?”
Steve Blow of Dallas Morning News wrote, "Over and over you hear it said: If Muslims oppose terrorism, why don't they stand up and say it? If that has been you, Mike Ghouse ought to be your hero."
Muslims are sick of the terrorists, ISIS, Al-Qaeda, Boko Haram and their ilk committing evil acts and conveniently passing the buck to their religion, and Muslims are neither happy with those few gullible Americans who are too eager to buy the poor excuses of these gangs. Instead of punishing these criminals, they are hell bent on finding faults with the religion.
In behalf of American Muslim Institution a rally was organized on the steps of Lincoln Memorial in Washington, DC, on Friday, November 20, 2015. The symbolic location was chosen to mirror the effort of Dr. Martin Luther King, Jr., who brought a positive change to the American civil Society with his famous, “I have a dream” speech.  Dr. Ghouse believes that this effort has seeded the momentum for yet another positive change; acceptance of Muslims as equals with the process of integration.
A reporter asked what would be achieved by condemning or demonstrating here at Lincoln Memorial.  Dr. Ghouse responded, “Evil exists because good people do nothing about it, we the good people are doing something about it; we are condemning the evil acts of ISIS, and sending them a clear message that the world condemns their act and that they have no place among the civil societies unless they surrender and give up terrorism, violence and extremism.
At the National Press Club, Dr. Ben Carson was asked if he verifies the information he relays about Muslims and Islam. The lack of response led Dr. Ghouse to offer advice and guidance to him, and if he considers the advice, he will save himself a lot of regrets and time on doubling down on the false information, and if he were smart, he can earn at least 3 Million Muslim votes.
Dr. Mike Ghouse is a proud, unapologetic Moderate Muslim and a passionate advocate of Pluralism in religion, society, politics, race, dining, clothing, dancing, sports and every aspect of life. He is a public speaker, thinker, writer and a commentator who is considered an authority on Pluralism and Interfaith relations in America, and offers pluralistic solutions on issues of the day.
Phyllis Curott, the Vice Chair of Parliament of World’s Religions writes," Mike Ghouse has the courage of his convictions - he carries a spark of inspiration that can only be called Divine…..”
Religion News Service,
" (RNS) A Florida pastor plans to burn a pile of Qurans on the 9/11 anniversary, and interfaith activist Mike Ghouse says, “It is not what (the pastor) will do, it is what we do as Americans and American Muslims that matters.”
Dr. Ghouse has appeared in more than 150 TV Talk shows, including 102 with Sean Hannity alone. He has served as
subject expert hundreds of times on nationally syndicated radio shows. Many listeners have heard his informed opinions at the time of the Quran Burning issue in Mulberry, Florida, Quran Bashing in Dallas Texas, during the Ground Zero Mosque, Boston Bombing, Garland, Phoenix, Washington and other major conflicts.
He has published more than 3000 articles on a variety of topics, of these; more than 1000 are on Pluralism, including 225 pieces in the “Texas Faith” column of the Dallas Morning News and 130 articles at Huffington Post.  A thousand articles on politics, Israel Palestine Dialogue, India, and Terrorism, foreign policy, movies, sports, culture and motivation. The rest of the thousand are about the Pluralistic values of Islam and Muslims.
American Muslims are committed to a prosperous and secure American for every one of the 318 Million Americans.
Full story and the links at: http://theghousediary.blogspot.com/2015/10/the-voice-of-moderate-islam-in-america.html
Contact:
Mike Ghouse (214) 325-1916
SpeakerMikeGhouse@gmail.com
www.TheGhouseDiary.com

Islam is a beautiful system, like all other faiths devised to restore sanity and common sense in a given society through simple basics like building trust, being truthful, be a security to fellow beings, stand up for justice, practice non-judgementalism,  jettison arrogance and adopt humility, and kindness.

These are the seven principles of building cohesive societies where no human has to live in apprehension or fear of the other,  indeed that is the foundation of Islam and a few Muslim have forgotten it. We have to restore it now for building a cohesive world, where people live their lives and let others live theirs.

Prophet Muhammad (pbuh) laid that foundation, and those seven principles made him an Amin, an individual who lives his life per those principles.  Unfortunately, a few have made Islam to be a political system, which it is not. Indeed, sadly all religions have become political systems of you or me, rather than spiritual system of we are in this together.

Preparing a talk on the subject. 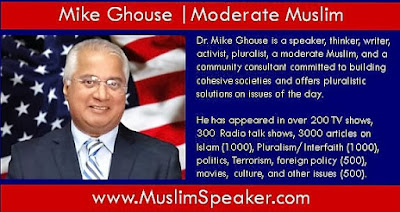 Dr. Mike Ghouse is a community consultant, social scientist, thinker, writer, news maker, and a speaker on Pluralism, Interfaith, Islam, politics, terrorism, human rights, India, Israel-Palestine and foreign policy. He is committed to building cohesive societies and offers pluralistic solutions on issues of the day. Visit him in 63 links at www.MikeGhouse.net for his writings at TheGhousediary.com and several blogs listed there in.

Posted by Mike Ghouse at 6:27 AM No comments:

Muslim Success Stories  | TheGhouseDiary.com
Louisville, KY, January 12, 2016 -- Dr. Babar Cheema and I ran into each other in Louisville Airport terminal. I was heading to Washington and he was returning from Washington.

From time to time, I would like to write the Muslim success stories, not the ones who make lots of money, but the ones' who do things that will create better safer and secure societies for all. 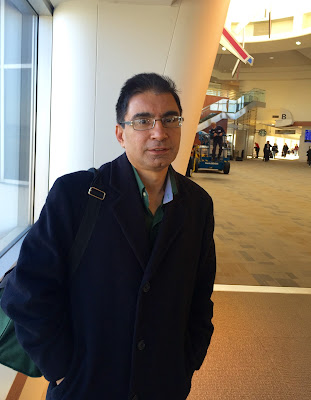 What a joy it was to know that he was an honored guest at President Obama’s state of the Union address last night. Dr. Mohammad Babar Cheema and a few others have worked relentlessly in building relationships with fellow Americans of all hues, and this note is to appreciate his work and to acknowledge his contributions.

If you know any other Muslim who was invited, please let us know with their information, the least we can do is acknowledge and encourage others to get out and be a part of the society.

This is how we become part of the American story, thanks for setting the example.

I urge every Muslim to make that effort, to get out and be with the people, if you can afford, please invite a Christian, Jewish, Hindu, African American, Hispanic, Chinese and an Arab family to dinner, at least once a month.  For God's sake get to know each other as friends and kindly keep religion and politics out of the conversation, don't even try it. We all need to connect with each other as fellow Americans with common concerns.

If God gives me life, I want to do something very big this December, and want to celebrate those Muslims who have built relationships with at least 10 families of different faiths including- Atheists, Baha’i, Buddhists, Christians, Hindus, Jains, Jews, Native Americans, Pagans, Shinto, Sikhs,  Wicca, Zoroastrians and others. Each denomination in Christian and Muslim traditions counts as one.   There is no limit to how many Muslims can do that.

I'll be happy to share simple guidelines to make the dinner successful and memorable for everyone.

Here is a link to the extraordinary work that testifies their work in building good relationships.
http://theghousediary.blogspot.com/2015/09/are-muslims-part-of-american-society.html?m=1

Dr. Mike Ghouse is a community consultant, social scientist, thinker, writer, news maker, and a speaker on Pluralism, Interfaith, Islam, politics, terrorism, human rights, India, Israel-Palestine and foreign policy. He is committed to building cohesive societies and offers pluralistic solutions on issues of the day. Visit him in 63 links at www.MikeGhouse.net and a bulk of his writings are at TheGhousediary.com and several blogs listed there in.
Posted by Mike Ghouse at 2:13 PM No comments: