Mitt Romney, you can do this, others don’t have the balls. 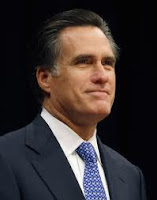 I was concerned with Romney's statements earlier on that bordered on bigotry, but he has done very well with his response to a question by a woman, "Do you believe in the divine saving grace of Jesus Christ?"
"I would hope that there are people in our nation that have different beliefs. There are people of the Jewish faith and the Islamic faith and other faiths who believe other things, and our president will be president of the people of all faiths," he said.

"We welcome people of other faiths. I happen to believe that Jesus Christ is the Son of God and my savior, but I know other people have differing views and I respect those views, and I don't believe those qualify or disqualify people for leadership in our nation," he said.


http://www.politico.com//blogs/burns-haberman/2012/01/romney-gets-a-faith-question-in-sc-110840.html
Indeed I am working on developing leadership programs to train our future leaders to be free from bigotry at America Together Foundation.

Here is an item I wrote way back and you ~nearly pass my test of Pluralism.
We are one nation under God, indivisible with liberty and justice for all. We are represented by every race, nationality, ethnicity, language, culture and religion. We see God as one, none and many and in every form; male, female, genderless and non-existent, being and non-being, nameless and with innumerable names. Americans together are committed to preserve this pluralistic heritage of America.
http://americatogetherfoundation.blogspot.com/2011/11/americans-together-documentary_11.html
You may really like this Pluralism Prayer, if you can subscribe to this, you have won me as an individual and I will do these prayers for you in one of your debates or fund raising.
Text: http://theghousediary.blogspot.com/2011/12/pluralism-greetings-and-prayer-at.html
Actual Prayer in Carrollton City Hall – Congressman Kenny Marchant has listened to this; http://www.youtube.com/watch?v=8mc9D9guPMY&feature=youtu.be
Americans Together building Cohesive societies
OUR MISSION
Our Mission is to build a cohesive America, where no American has to live in anxieties, discomfort or fear of the other.
OUR VISION
It is our individual and collective responsibility to keep law and order and faithfully guard the safety of every citizen. Hate, prejudice and stereotyping are some of the many root causes of disrupting the peace in a society and it is our duty to track down the source of such ill-will and work on mitigating it.
We believe humans are open to choices and will make best choices if the path is paved for them. It has been our experience through our annual events like Unity Day, Reflections on Holocaust and Genocides, Thanksgiving, Conferences, that our participants have walked out with a commitment to be less biased, less prejudiced and willing to stand up for the others for the sake of general good of mankind.

We are committed to enhance the efforts nationally, one brick at time in building a cohesive America, where each one of the 312 Million Americans feel safe in their homes, at their jobs, places of worship and in the public places.
Mike Ghouse is committed to building a cohesive America where no American has to live in apprehension, discomfort or fear of the other – www.MikeGhouse.net

ROMNEY, YOU CAN DO THIS, OTHER BIGOTS DON'T HAVE THE BALLS
http://theghousediary.blogspot.com/2012/01/mitt-romney-you-can-do-this-others-dont.html


OTHER ROMNEY LINKS :: I WROTE 11 ITEMS ON ROMNEY?