It’s the 3rd day of Ramadan, and Plano Masjid was my destination. Most of the people involved in building of the mosque were part of the Richardson Mosque eons ago, as Plano grew and filled every piece of land that there was with homes, so did the growth of Muslim population. Now there is another Mosque on the east side of the town called EPIC, East Plano Islamic Center.

Plano is one of the most progressive cities in the area and took off in mid-to-late eighties. It is also one of the top ten safest cities for single women, no; it was # 1 at one time, Mayor Pat Evans took joy in correcting me. Former Mayors Jeran Akers and Pat Evans were part of many a events including Unity Day USA. Indeed, we got 4 Cricket play grounds when Jeran Akers was the Mayor and I was President at North Texas Cricket Association then. Pat Evans has been a part of the Unity Day since 2005. I have met the new Mayor but yet to develop relationship.

“Reminder: Community Iftaar at Masjid does not mean we sit with our family and friends of same ethnic background to breakfast. It means we breach the barriers we have created and create a bond of brotherhood and sisterhood by building friendships and relationships with brothers and sisters beyond our ethnic background during these If tar’s. Please try to sit with somebody you don't know, break bread together, build friendship, bond, and then invite them and their family over for Eid. Many Muslim's feel isolated on Eid because they are not Desi or Arab. Let's change this.”

Indeed that has been our effort as well, to visit every mosque of every denomination, to know each other and familiarize with the uniquenesses of each other. Quite a lot has been written in the last two years on this Blog. Except the actual prayers, the ritual prayers, most other practices differ from community to community.

I was pleasantly surprised to see a large number of young people during the time of Iftaar, but at the prayer, there were two rows of adults. I was wondering where they came from. They were not at the Iftaar and of course, I did not check if there were two different venues for Iftaar. Normally all people sit together and break the fast. 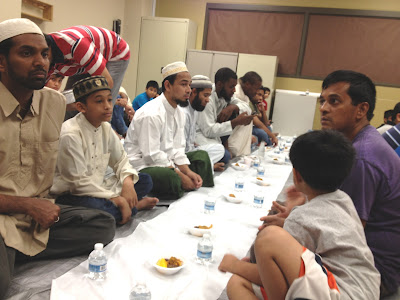 In the kitchen where they were making plates with dates and fruits, it was good to see an adult asking the teens to wear the gloves to handle the food. Indeed, yesterday at Richardson Mosque, each one in the food supply and service was wearing gloves.


Neither yesterday, nor today, there were napkins to wipe the fingers. I have found this to be a common practice among most of the homes as well, napkins is the last thing on their mind, collectively as well as individually. I wiped it on my sleeve, no, I am just kidding. I wiped inside of my pant pockets.

Mike Ghouse is committed to doing his individual share of building cohesive societies and invites you to the 8th Annual Unity Day USA on Tuesday, September 11, 2012. Details at www.UnitydayUSA.com, it’s an event that builds bridges and uplifts every American.
Posted by Mike Ghouse at 9:58 PM