A Jew calls for 850 Million Hindus to assert themselves

I am baffled by the audio tape link listed below. Normally, I ignore the guys who thrive on pitiching one Indian against the other. However,  since it came from an active Indian leader and has come many times in the last few days in the email.  I decided to listen and did not hear any facts to back up the rants of the speaker. 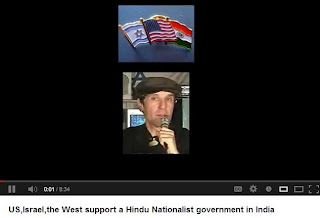 Throughout our history, there have been men who have made their good by keeping other people in conflict. If you listen – he would want India to remain in a non-stop civil war. The man has nothing to lose but gain.

The right wing Hindus would love this kind of rhetoric, facts don't matter to the them, and the same goes with right wing Muslims who love similar rhetoric, and Christians and Jews are no different either.

If we listen to this guy, the gullible among us would buy his hate pitch, and instantly start hating fellow Indians, and for some, their blood boils with a desire to kill every Muslim in India, particularly the Indians living in the United States. Please remember the extremists are no more than 1/10th of 1% of any group, be it Hindus or Muslims.

Imagine a scenario – where people would listen to this man, and go on a killing spree, but how many can you kill? Then Muslims will kill Hindus… is there an end to this Sunghursh (endless fight)? The Norway killer, the Wisconsin Killer had something in common, they cited reading Pamela Geller and Robert Spencer's hateful pieces about Muslims. Pamela's inciting posters may have been the reason for the death of a Hindu man in New York subway. I had warned about it onFox News twice. As Indians we have a responsibility to nail every one who instigates disturbance and disturbs the peace.

If you and I are willing to give up everything and go on the street with swords– and ready to kill each other, then we are something. Otherwise we are disgusting humans who want the ordinary Hindu cocks to fight with the ordinary Muslim cocks to bleed themselves to death. It is a game to some of us, other people's lives don’t mean a thing to us. But if this man expects you and me to fight, either he is delusional or we are stupid.

All of us have worked hard against anti-Semitism, racism, anti-GLBT, Islamophobia, anti-immigrations, women's rights, discrimination,  and we must continue to work hard against these individuals.
This guy is a disgrace to Judaism, Israel and America. He is justifying in his own sick mind what the Israeli settlers are doing to the Palestinians; he thinks a majority should bulldoze the minorities. Does't this hypocrite expect the United States to treat him as an equal, and yet he advocates otherwise, it is this kind of ugly men that contribute to Antisemitism.  Are my fellow Indians dumb enough to believe that they as a Minority in the United States should be treated in the same fashion as they want the Muslim minority in India be treated?

I appeal to the Jewish communities to denounce this man and keep their records clear,  that they do not approve of this. Why should  a Muslim man on the street not Hate Jews, if this Jew is inciting Hindus to hate Muslims? The guy is not an idiot, he just does not have morals or care for the future of Jews in the world, Mr. Madoff is for himself.

I am sure some of the right wing Hindus are eager to write a big check to their savior, who laughs his ass off after collecting the monies. I urge you to spend your money in building relationships and causing lasting peace with your money, so all of us can live in peace. Please don't treat ordinary Hindus and Muslims as cocks who can kill each other. Let us not be his pawns.

As Indians we need to grow up, and not fall to those who want us to fight – they succeeded in splitting our nation, and keep us busy hating each other, they have done that in other parts of the world as well. Do we want to be screwed more?

Most of the Indian Hindus, Muslims, Sikh, Christians, Jain, Buddhs or others care less, but a few have made their business to spread hate. Don't brush this off, it is the build ups like these that explode into riots.

Ask yourselves, what is your contribution towards making India, a better India to live? A better India is not seeing luxury cars on the roads, call centers or big homes, or industrial growth, a better India is where no Indian is afraid of the others, and if we have bad guys, we need to lock them up, with a clear understanding that their parents, siblings, kids, spouse or religion or not responsible for his actions.

I urge you to read Hyderabad blasts to appear in Huffington post this week at:http://www.huffingtonpost.com/mike-ghouse
Mike Ghouse is committed to building cohesive societies where all of us can learn to live with each other without fear of the other.
...................
...
Mike Ghouse is a speaker, thinker and a writer on pluralism, politics, peace, Islam, Israel,India, interfaith, and cohesion at work place. He is committed to building a Cohesive Americaand offers pluralistic solutions on issues of the day at www.TheGhousediary.com. He believes in Standing up for others and has done that throughout his life as an activist. Mike has a presence on national and local TV, Radio and Print Media. He is a frequent guest onSean Hannity show on Fox TV, and a commentator on national radio networks, he contributes weekly to the Texas Faith Column at Dallas Morning News; fortnightly atHuffington post; and several other periodicals across the world. His personal sitewww.MikeGhouse.net indexes all his work through many links.
Posted by Mike Ghouse at 2:18 PM