Muharram 2014 - Ashura, a catalyst for change

By Mike Ghouse
Published at the Arab Daily News

http://thearabdailynews.com/2014/11/01/muharram-2014-catalyst-change-muslims/
Of all the Muharram commemorations, Muharram 2014 could become significant in this millennium. It was a battle between good and evil fought 1334 years ago that we face collectively now. Imam Hussein (ra) stood up against the wicked king Yazid, and refused to endorse him as the spiritual leader, also known as “Caliph” of the growing Muslim community and in the process sacrificed his life.
Imam Hussein was martyred in the Battle of Karbala in 680 AD (61 AH) by Shimr Ibn Thil-Jawshan, along with most of his family and companions. The annual memorial for him, his family, children and his associates is called Yom-e-Ashura commemoration that is the tenth day of the month of Muharram and is a day of mourning for Muslims.
Imam Hussein (ra) is grandson of Prophet Muhammad (pbuh), and son of Hazrat Ali and Fatima (ra). Hazrat Ali is Prophet’s cousin and Hazrat Fatima is daughter of the Prophet.
There is a myth out there that only Shia Muslims commemorate the Martyrdom. That is not entirely true; most Muslims do, the differential is in the rituals. 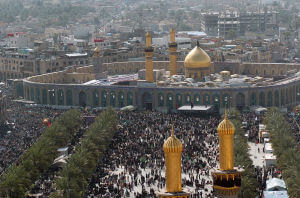 The Shia Muslims of course express their grief in a variety of ways, including holding daily gatherings called Majlis and narrating the events that led to Martyrdom – Shahadat. I am a tough guy, but when you hear what happened to Abbas and the baby Asghar, and you’ll cry, it is a moving story of humanity, and I have cried every time.
They also carry floats and hand symbols made of brass as a part of the commemoration. On the night of Ashura, the pain threshold rises for the believers, and the participants passionately bear the self inflicted hurt and pain with chains and ropes, which is insignificant compared to what Imam Hussein had endured. It is feeling the pain and developing empathy and respect for the Imam, one of the Islamic heroes for leaving a legacy of righteousness.
The Sunni Muslims on the other hand observe a day of fasting on Ashura, and pray for the martyrs; some participate in the Shia proceedings.
The Ahmadiyya Muslims offer special Darood (ode to prophet and his progeny) and Duwa (supplications) throughout the month of Muharram.
This Martyrdom, “Shahadat” as we call it, is commemorated by almost all Muslim denominations including Shia, Sunni, Ahmadiyya, Sufi and others.
Please note that the Salafi/Wahhabi and Deobandi traditions do not subscribe to celebrating Prophet’s birthday, or commemorating the Shahadat of Imam Hussein. There is absolutely nothing wrong with it, as it is a part of the culture and not religion. Shia Muslims believe that Islamic faith was fully wrapped up at Ghadir Khumm believing that Prophet assigned Hazrat Ali to be his successor to carry the faith forward; however the Sunnis believe that the faith was indeed completed, but no passing the mantle of faith was mentioned by the Prophet. We have to learn to respect the otherness of others and live with our differences, rather than force conformities. No one can compel the others to believe what one believes.
Last year, I wrote about the Centrality of Imam Hussein at Huffington post:http://www.huffingtonpost.com/mike-ghouse/muharram-2011-centrality-imam-hussain_b_1117929.html
THE BATTLE
The Battle is not between Shia and Sunni, it is between Good and the bad, good IS represented by minding your own faith as Quran advocates; there is no compulsion in faith, whereas, the evil is represented by hurting others for difference in belief. The good represented by a belief that you alone are responsible for your actions on the Day of Judgment, which is the foundational belief in Islam, but is countered by the evil arrogance that we are right and others are wrong. The good is represented by the faith that God alone is the master of the Day of Judgment, and the evil is represented by pre-empting God and usurping his authority to judge what is in one’s heart.
The Sunni Shia divide was exacerbated by Bush invasion of Iraq; otherwise the relationships were not murderous, like they are today. The conflict has always been there, but never to hunt down and kill the Shia Minority as it is happening in Pakistan and shamefully in Malaysia and Indonesia.
The battle is between evil and good and someone has to take a stand to stop this hatred for each other and the takfiri (Judgmental) mentality. I have no idea if those few trouble maker Muslims really believe in what they recite every day at least 17 times – that God alone is the Master of the Day of Judgment and no one has the right to judge about your faith. The one sin God does not forgive is to dilute his sovereignty by speaking in his behalf without a certificate of appointment. No one but God knows what is in your heart, says the Quran umpteen times.
God says the best ones among us are those who care for fellow beings, and who take time to learn about each other. If we can learn to respect the otherness of others, and accept the God given uniqueness of each one of us, (Quran 49:13) then conflicts fade and solutions emerge. Please don’t forget, God does not talk about Muslims exclusively, he talks about entire humanity from the very first verse of Quran to the very last chapter.
Dr. Anwar adds, “The real significance of Karbala is that one has to stand up for something in this life for which one is willing to sacrifice all material possessions.”
Let this Muharram pave the way for peace and justice for one and all. Let Imam Hussein’s sacrifice stir us up to stand for justice for all humanity.
I pray that the Shahadat of Imam Hussein become the catalyst for us to remove our differences and come together for peace, security and prosperity of Muslims and every human being. Amen!
mike
Mike Ghouse
(214) 325-1916 - text/talk
World Muslim Congress

To be a Muslim is to be a peace maker who seeks to mitigate conflicts and nurtures goodwill for peaceful co-existence of humanity. Our work is geared towards building a cohesive society where no human has to live in apprehension or fear of the other. World Muslim congress is a think tank and a forum with the express goal of nurturing pluralistic values embedded in Islam to build cohesive societies.  If we can learn to respect the otherness of others and accept each other's uniqueness, then conflicts fade and solutions emerge. Mike Ghouse is aMuslim Speaker  thinker and a writer.
Posted by Mike Ghouse at 9:29 PM