God wants us to live in peace, and harmony with each other.  If we follow the Sunnah (practice) of Prophet Muhammad and follow the Guidance of Quraan, we can seldom go wrong.   What does it take to build that momentum… to bring about a change in a society,   I am glad to see Muslims taking the initiatives to build a cohesive world. The Role of Muslims in building cohesive societies was broadly the topic, and Pluralism, co-existence, Islam, Israel and peace were part of the conversation.  Continued http://theghousediary.blogspot.com/2012/11/building-bridges-on-turkish-tv-with.html 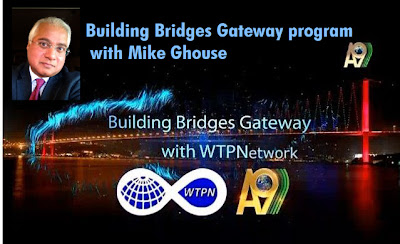 Thanks to the Turkish Television A9 for their program building bridges with guests from around the world. If you get the time, check out some of the fascinating interviews.

I was called to talk about Role of Muslim in the world, and Pluralism, co-existence, Islam, Israel and peace. What can we do to bring about a change in a society, what does it take... I am glad to see Muslims taking the initiatives to build a cohesive world.

On my part, I have a lot more work to do, one of them is to get Jews, Christians and Muslim to start including Hinduism, Jainism, Buddhism, Sikhism, Baha’i, Wicca, Earth based and native traditions as a part of their casual conversation.

My message at the end was, God has intentionally created us to different races, religions, ethnicities and cultures, let’s honor gods wish for us to live cohesively.

God willing and media willing, I will be on a few more TV talk shows in 2013, but my dream is to be on Jon Stewart and Rachel Maddow Shows, I will make the effort to communicate pluralism with humor.

Mike Ghouse is a speaker, thinker and a writer on pluralism, politics, peace making, foreign policy, Islam, Israel, India, Pakistan, interfaith, and cohesion at work place or social settings. He is committed to building a Cohesive America and offers pluralistic solutions on issues of the day at www.TheGhousediary.com. Mike has a strong presence on national local TV, Radio and Print Media, and is a frequent guest on Sean Hannity show on Fox TV, and a commentator on national radio networks, he contributes weekly to the Texas Faith Column at Dallas Morning News, fortnightly at Huffington post, and several other periodicals across the world. His personal site www.MikeGhouse.net indexes everything you want to know about him.
Posted by Mike Ghouse at 11:55 AM