God belongs in our hearts and not school

The need to keep God in our hearts is important, he remains a loving God, but when we project him in public square or schools, it has a chance to hurt one child or the other, who does not see God the same way as others. Should we not respect that individual?

Would God like any one of his children be hurt invoking his, her or its name?

There 'may' be a way out, if we all can agree that God is a convenient name to the energy that caused, sustains and terminates life, and each one of us can respect each others' belief that it could to be a male/ female or genderless, one, none and many, nameless/ multiple names, existent or non-existent being, specific or generic... isn't that causer universal? Shouldn't we?

Isn't better to keep God in our hearts than dump him in school and hurt him? Have we not created him in our own image, as others have in their own image? 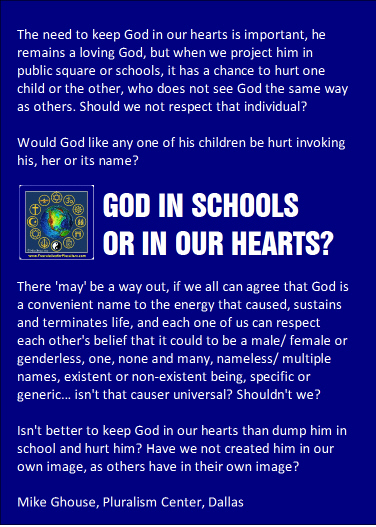 I see a lot of sense in keeping God to ourselves, and within our hearts. We can always pray anytime and anywhere, one the bus, in the shower or in a quiet moment. Until such time when all of us can accept to school prayers, not the majority, but the unanimity across the board, we need to respect this particular law. Our model is something other nations can emulate some day, a model where every human is valued for who he is, what he eats, drinks, wears or believes. As long as one’s actions do not affect public safety, he or she should have the freedom to do anything. My freedom hinges on freedom of others that surround me.
----------
Mike Ghouse is a speaker, thinker and a writer on pluralism, politics, peace, Islam, Israel, India, interfaith, and cohesion at work place and standing up for others as an activist. He is committed to building a Cohesive America and offers pluralistic solutions on issues of the day at www.TheGhousediary.com. Mike has a presence on national and local TV, Radio and Print Media. He is a frequent guest on Sean Hannity show on Fox TV, and a commentator on national radio networks, he contributes weekly to the Texas Faith Column at Dallas Morning News, fortnightly at Huffington post, and several other periodicals across the world. His personal site www.MikeGhouse.net indexes everything you want to know about him.
Posted by Mike Ghouse at 11:17 AM